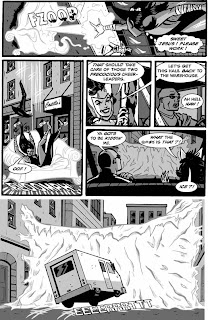 Posted by Percy Trout at 7:35 AM No comments:

I am a lazy artist (the Experts, etc.) 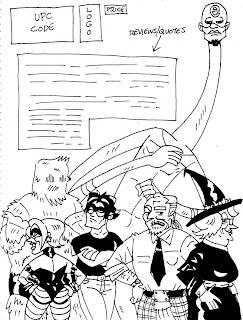 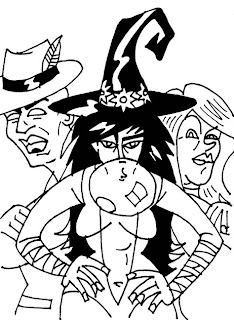 Yes, it's true. I can be pretty lazy sometimes with my art. Plus, I just enjoy scribbling... it's very relaxing. I kick myself for not doing it more often.

Anyway, Clarence Pruitt and I are on our way to finishing the first "the Experts" graphic novel. Usually, when I have a visual idea for something that Clarence will create for the final illustration... I'll scribble my idea down... and then Clarence will crank the pencils out... for real.

Here are the scribbles I recently sent to Clarence for the cover of "the Experts" graphic novel. They're not good... but they don't have to be. Clarence is an excellent draftsman... and requires very little direction.

He'll appreciate that I said that. ;o)

Thanks,
Kenn
Posted by Percy Trout at 1:24 PM No comments: 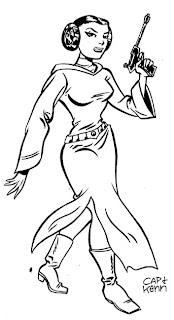 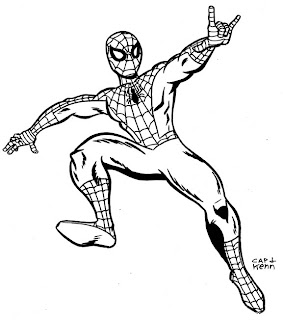 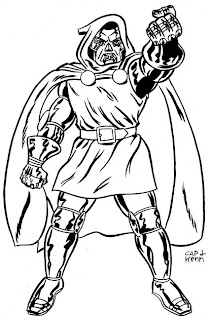 Here are some more super hero pin ups by myself and Clarence Pruitt. These are Doctor Doom, Spiderman, and Pricess Leia.

Say, if you'd be interested in purchasing one of these original, pen & ink pin ups for a nominal fee... drop me a line at:

Thanks,
Kenn
Posted by Percy Trout at 11:02 AM No comments: 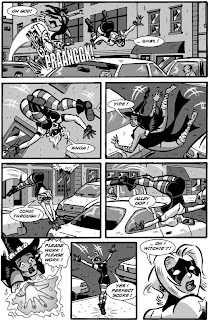 Posted by Percy Trout at 8:03 AM No comments: 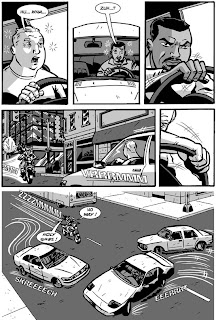 Posted by Percy Trout at 8:48 AM No comments: 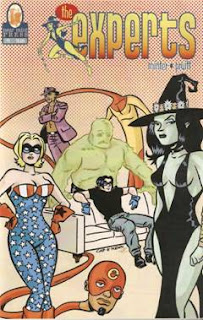 By Bill Gladman of comicrelated.com.

"The Experts #1 by Kenn Minter and Clarence Pruitt. Kenn is actually a member of the Comic Related extended family and was set up at the second Comic Related booth over in the Creator Commons. Kenn is a very hard worker…that much is obvious…as he writes, inks, and letters this book….and a couple other books as well. I’ve been checking out pages of story art that Kenn regularly post on the site for months now and knew this book was on a short list of books I was walking out of the con with.

The Experts (the book) is actually a book with three different stories in which the Experts (the team of super-heroes) is the first. A team that features Doctor Delta, Free Mary, Ninja Witch (love that name and the character…my favorite of the group), Mr. Elaztik (another cool name and character), Emerald Yeti (my second favorite of the group), and Naked Man (don’t know why he’s called Naked Man….because he’s never naked in the story…but hey…I’m not complaining.)

In this first issue we learn that this team of Experts were not the first team to go by that moniker. And past members Frost Queen…and another member …that talks like Sean Connery from Highlander seem to have more than a small interest in this new line up. A conversation between the two also seems to include a few well placed clues about the past of Emerald Yeti, Mr.Elaztik, and Doctor Delta.

And speaking of the past….it seems that Naked Man and Ninja Witch have a past as well…one that Ninja Witch wants to forget….but Naked Man keeps digging up. Hilarious last panel of the story.

The book…as a whole…had an element to it that I really like but I’m sure nobody can share. Kenn’s writing and Kenn and Clarence’s art has a heavy “Larry Blake” feel to it, which I love. Larry is an artist and friend and has produced books like Dark Star, Reeealy (not a typo) Comics, and World Without Heroes out of his Rock Bottom art studios for years…hopefully I’ll see Larry again at this coming S.P.A.C.E. Con 2009.

Like the Dracula Inc. book the lead story that featured the Experts ended right when I was getting into it….but at least this story was four pages longer. And I found it interesting enough that I want to continue to read it…especially with the appearance of a character next issue that calls herself the Silver Muse…influenced in visual concept by a certain Scarlet Witch.

Unlike Dracula Inc…the stories that followed the lead were just as good or even better… (the Incredolad story was very funny and at the same time a testimony of what appears to be a trait of Kenn’s…dark satire)…and the Dr. Michael Schlessinger, PSC story…the last one in the book…was my favorite of the three. 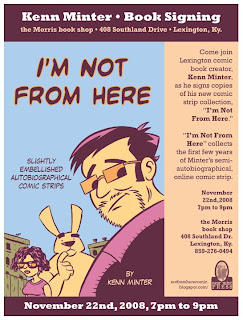 I know this is early notice, but, what the hey...

Email ThisBlogThis!Share to TwitterShare to FacebookShare to Pinterest
Labels: Comics, Graphic Novels, I'm Not From Here

On sale on eBay!! 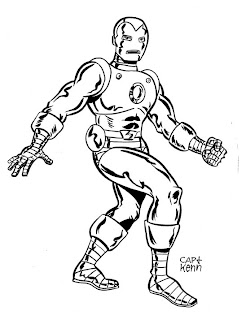 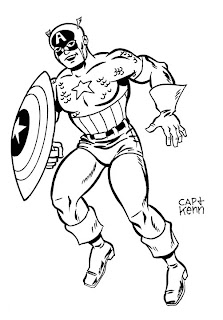 For sale on eBay, I am currently offering these two, original, pen and ink drawings of Marvel Comics' Iron Man and Captain America. These have been penciled by Clarence Pruitt and inked by me. They are drawn on sturdy vellum card stock paper and suitable for framing.

These are one-of-a-kind items. 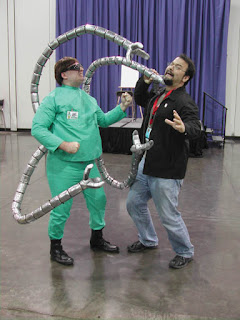 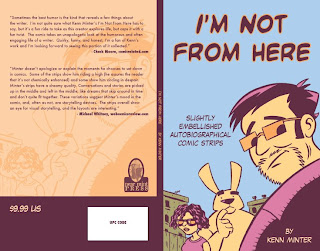 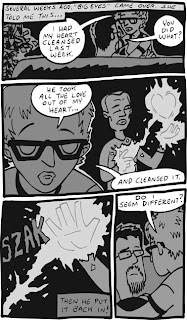 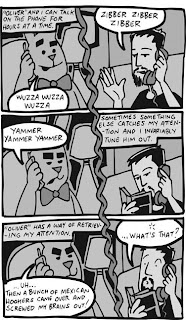 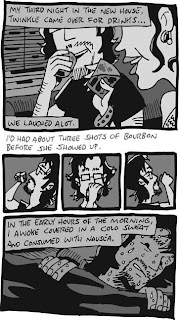 "I'm Not From Here," a 100 page collection of smart, bizarre, thoughtful, and hilarious semi-autobiographical comic strips is finally... available for purchase online!

Thanks,
Kenn Minter
Posted by Percy Trout at 1:17 PM No comments:

Email ThisBlogThis!Share to TwitterShare to FacebookShare to Pinterest
Labels: Comics, Graphic Novels, I'm Not From Here 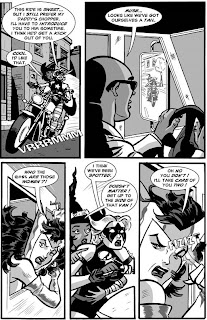 Posted by Percy Trout at 1:08 PM No comments:

Near Mint Press at the Mid-Ohio-Con 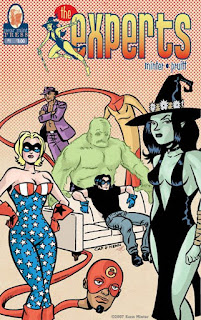 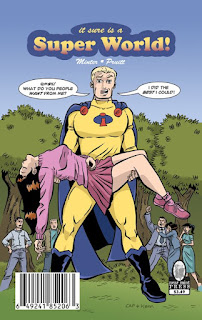 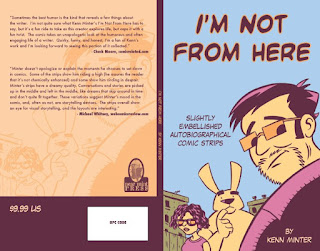 Hi folks. Please join me this weekend at the Mid-Ohio-Con in Columbus, Ohio. October 4th and 5th, 2008. I'll be selling and signing copies of "the Experts," "Super World," and the brand new collection of my semi-autobigraphical comic strips, "I'm Not From Here." I'll also be drawing and selling pin ups of any of your favorite comic book and cartoon characters.

I'm Not From Here

Mid-Ohio-Con
Posted by Percy Trout at 9:54 AM No comments: