Posted by Percy Trout at 8:47 AM No comments:

an excerpt from the Experts #4 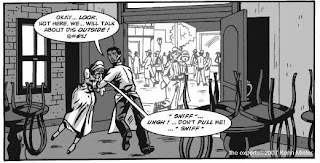 Posted by Percy Trout at 3:52 PM No comments:

YOUR INDY WEEKLY: THE EXPERTS
by Ryan McLelland

The Experts #1 and 2
Near Mint Press - $3.00 each
Written by: Kenn Minter
Illustrated by: Clarence Pruitt
Website: http://www.kennminter.com

With Kenn Minter’s The Experts you get a feeling that this superteam is called The Experts just like you call a big guy ‘Tiny’. But when you put together a team with old pros like Emerald Yeti and Doctor Delta with such nuebs as Ninja Witch, Free Mary, and the very dressed Naked Man one cannot expect to be as great as the Avengers, the JLA, or even the Great Lakes Avengers. Inanity runs rampant in this superb series that highlights what those who think they are great do in incredible situations…even if they aren’t that great.

The first issue features a trio of stories that introduces the newest team of Experts and also a shrink that caters to the problems of superhero and villain alike. The best story features IncredoLad – a youth in a small town that wears glasses and a bowl-cut ala Guy Gardner to preserve his secret identity. However everyone in this quiet town already knows that the unnamed teen is also the superhero IncredoLad.

The comedy moves forward when young Tina Tang falls into the river and starts drowning. All would have been fine with ol’ bowlcut running off to become IncredoLad to save the day except that Chet has to come over and provoke IncredoLad. Chet tells him to hurry and save Tina while IncredoLad defends everything from his eyeglasses, his bowlcut, and even a leg brace that appears out of nowhere that all but proves he CANNOT be IncredoLad. By the time he comes up with an excuse to get away from Chet (Chet and Tina’s friends all know he is going to change into his costume), IncredoLad runs into the woods, takes off his sweater, and finds that he left his costume at home. The situations get worse and worse as the reader gets a sinking feeling that Tina better learn to swim very quickly.

Issue two focuses more on The Experts themselves, namely Ninja Witch and Free Mary who are forced to take down the evil telepath Silver Muse. It seems that Silver Muse is able to control the minds of men and therefore only Ninja Witch and Free Mary can save the day. Not only that, the Experts’ leader Frost Queen points out, but the duo’s action figures (with exceptionally quality boobs!) are the lowest selling of the entire Experts line, so the two have to get out there more, fight more crime, thus causing more kids to want to go out and buy more of their toys. The two are off to fight Silver Muse, but the cattiness of two gals going to fight some evil bitch makes the comic sillier and better as it goes along.

Somewhat reminiscent of Bob Burden’s Mystery Men but with a devilishly sharp wit, The Experts is a perfect indy book that continues to throw pleasure at you page after page. From Clarence Pruitt’s sharp pencils to Minter’s ability to hit everything what would be wrong with every young superhero in the world, the Experts is truly a fun read that is destined to become a fave of every indy comic reader. It’s fun and it makes fun of all we behold, from masks to breasts to hopefully learning one day what Naked Man’s powers exactly are. The Experts is one book that indy readers should not miss.
Posted by Percy Trout at 8:49 AM 1 comment: 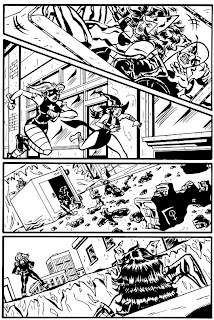 Great series! I have really enjoyed the first two books and cannot wait until the third issue is released. Speaking of, do you have an anticipated release date at this time?

The story-telling and artwork are a wonderful compliment to each other and already I can notice a progression in the backgrounds with the use of more gray tones, adding more weight or dimension to the art. I hate to draw (no pun intended) comparisons, but Darwyn Cooke and Bruce Timm come to mind, perhaps Allred also.

You have a light-hearted story telling style that is a relief to some of the more "over-inflated" story arcs that seem too prevalent in many of today's tales. I mean that as a compliment. With your books, the reader need not be concerned nor will he/she get too bogged down with continuity, history, etc. . . but will simply pick up a read that harkens back to a Golden or Silver Age book, while more sophisticated with a contemporary twist, complete in every single issue. It seems you have taken a very modern approach to getting issues printed and distributed and hopefully that will work out well for you, the creator, and myself the customer/reader.

Rob"
Posted by Percy Trout at 8:21 AM No comments:

My name is Brent Schoonover. Last Wednesday I visited my local
comic store and found a copy of issue 2 of The Experts. I loved the art
style and Kirby references so much I had to give it a shot. I'm glad I
did. I loved the book and plan on having my store get the book on my
pull list. Hopefully they can get issue one in store otherwise I'll get
one from you personally. Congrats on a great book and looking forward
to more.

ps- I loved the book so much I did a quick sketch of the Ninja Witch,
which I later realized those were throwing stars on her hat, so those
are wrong. Sadly I also drew it on the back of another comic script. 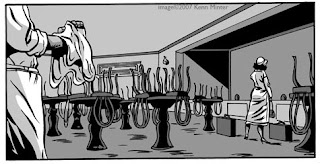 We want your Experts fan art!

Hey, do you draw? If so, we'd like to see your Experts fan art! Draw/interpret the Experts characters any way you like... and we'll post the results here. E-mail your art to: kennminter@yahoo.com. Let us know if you have a blog or website... and we'll plug that too!
Posted by Percy Trout at 8:22 AM No comments:

Over to the right of the blog, you'll find a link to the new "the Experts Theme Song!" The song lyrics were written by myself and the music was created and composed by my pal, Jim Shaw. It's a wacky tune which also functions as the team's roll call. Give it a listen and let us know what you think in the comments.

-Kenn Minter
Posted by Percy Trout at 8:18 AM No comments:

the Experts in the News 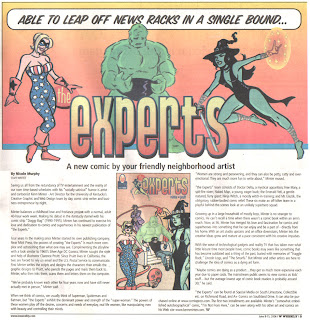 This article about the Experts ran in a local paper ("the Lexington Weekly") about a year ago. Click on the image to read the piece.
Posted by Percy Trout at 8:11 AM No comments: 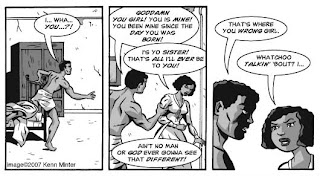 Posted by Percy Trout at 5:18 PM No comments: