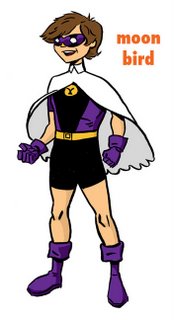 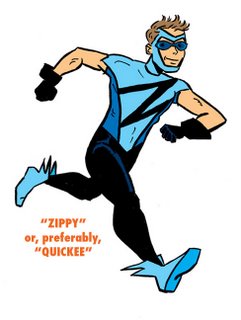 Recently, Clarence sent me some character sketches/costume designs for possible kid sidekicks to some of our adult characters from "the Experts" etc. Here we have "Moon Bird"... the long lost comrade of the moody Night-Guard (introduced in "the Experts" #1). Also, there's "Zippy"... the young chum of "the ZZZip." But, of course, we wouldn't be able to use the name "Zippy"... since it's already the name of a hilarious daily comic strip by Bill Griffith. I suggest we name the lad "Quickee,"... that way it's naughty and stupid all at once.

Of course, my favorite character has to be "Candy Corn Man"... I mean... how could it not be? His origin is as follows: 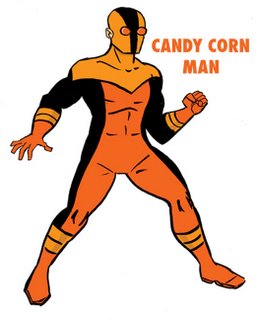 Wally Winchell was a mild-mannered youth... except for being your usual pain-in-the-ass teenager. Wally liked Halloween. He enjoyed All Hallows Eve gobs and gobs. Wally liked candy... Wally loved free candy. Wally cared much for trick-or-treating.

When Wally came bounding down the stairs from his bedroom dressed as his favorite superhero, "the Emerald Yeti," one Halloween evening... his father was aghast.

"Wally!" Dad exclaimed, "Where do you think you are going dressed like that? You're 17, son. You are too old to go out trick-or-treating. You can escort your little sister around the neighborhood if you want, but you're too big for Halloween. It's time to grow up!"

Dad rubbed his chin in consideration. "Nope. Sorry. Now take off that stupid costume and take Wendy out for awhile... I'd do it... but I don't feel like it, and there's a game on."

Wally hung his head in disappointment. He turned toward the stairs and ran up to his room. At the top of the stairs, he tore off his Emerald Yeti mask and screamed at his Father, "I hate you Daddy! I hate you!" 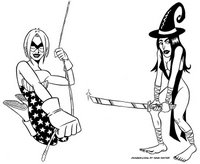 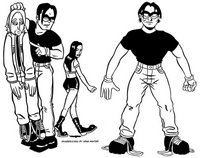 Here's an assortment of "the Experts" character sketches that I had done years ago... probably 7 to 10 years ago. These characters were haunting my sketchbooks long before I ever wrote any scripts or met Clarence Pruitt via the internet.

As you can see, I sorely needed Clarence's help on this project.

the Experts #1 in Stores! 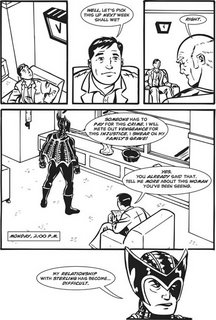 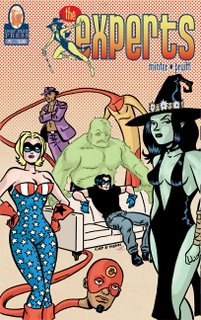 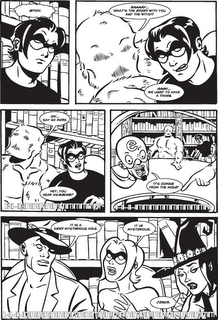 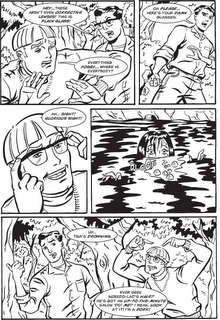